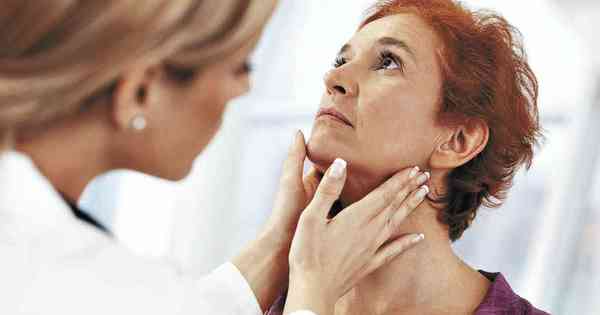 The thyroid is a gland that secretes hormones that are essential for various metabolic functions in the body. It acts at all stages of life, as it plays an important role in the growth and development of children and adolescents and remains essential for fertility, memory, the cardiovascular system, the menstrual cycle, the regulation of cholesterol, adequate weight and even functioning of the intestine apparatus.

By having this fundamental character of ensuring the proper functioning of the organism, certain dysfunctions can be easily noticed. However, although some symptoms are evident, it is recommended that an evaluation be carried out by the patient’s trusted physician, preferably an endocrinologist, who can diagnose gland disorders. Among the main problems is hypothyroidism, when there is not enough production of thyroid hormones; hyperthyroidism, characterized by an excess of these hormones in the body; nodules, which are relatively common; and thyroid cancers.

Some celebrities have even spoken out publicly on the subject. Last week, singer Joo Neto, of country duo Joo Neto and Frederico, claimed on social media that he had thyroid cancer. Actress Carla Diaz was diagnosed with thyroid cancer after a nodule appeared which, after a biopsy, was diagnosed as malignant. Another similar situation was that of the inspirational muse of the song “Girl from Ipanema”, Hel Pinheiro. In both cases the result was surgical and positive, both had a good recovery.

According to endocrinologist Brenda Leal, hypothyroidism is a condition in which there is not enough production of the thyroid hormones, triiodothyronine (T3) and thyroxine (T4). Consequently, the affected person may experience fatigue and drowsiness even with adequate rest, intolerance to cold, swelling caused by excess fluids, and weight gain. It is as if the organism were functioning more slowly, for lack of the necessary hormones.

The main autoimmune cause. Which means that the body itself generates antibodies that interfere with the functioning of the thyroid. To treat the disease, it is possible to use medication and perform hormonal replacement, in addition to being necessary for the patient to eat well and have healthy lifestyle habits, such as the ingestion of iodine in quantity correct. Under no circumstances are self-medication and the abandonment of professional follow-up, essential for the success of the treatment, recommended.

On the other hand, hyperthyroidism is characterized by the excess of T3 and T4 hormones in the body, which also have a negative impact on the body. It is possible that it is autoimmune, like hypothyroidism, but it can also be caused by autonomic production.

Doctor Brenda Leal reports that symptoms include tachycardia, tremors in the extremities, clammy skin from excessive sweating, heat intolerance, insomnia, irritability and weight loss even with a increased food intake.

Treatment is not generalized, depending on what led to this increased hormone production. In some cases, medications are used to regulate heartbeat, tremors, and other symptoms that directly affect the quality of life of the patient affected by the problem.

In combination with these, drugs can be used for hormonal control with a dosage adapted to the clinical picture. There may also be surgery to remove part or all of the thyroid.

Most nodules are benign and they are only removed in specific circumstances, as was the case of actor Bruno Gagliasso, who removed a non-cancerous cyst and did not need a long and complex treatment. . “In some cases, they can be identified during physical examination, by touch, but most are discovered through imaging of the cervical region, such as ultrasound,” says endocrinologist Bruna Borges.

Dr. Brenda Leal reports that the factors that lead to the appearance of problems, such as nodules, are related to Hashimoto’s thyroiditis, genetic predisposition and lack of iodine in the diet. Therefore, more caution should be exercised if there are already cases in the family of thyroid disorders and more frequent screening for possible problems. In addition, diet is essential to prevent a series of diseases and imbalances, both in the thyroid and in the rest of the body.

Besides basic care, Bruna Borges warns: “There is a prevalence in the development of thyroid nodules in women, and the incidence increases with age.” Thus, routine examinations are essential, as early intervention is always preferable, thus avoiding further complications and aggravation of possible symptoms.

Another point of attention, according to the professional, is that there are several “triggers” for the development of thyroid disease. “The three main villains to our thyroid health are environmental toxins, inflammatory foods and nutritional deficiencies. A significant portion of these exposures are cumulative in our bodies, the degree of interference will depend on each individual’s sensitivity, in addition to the genetic predisposition”, explains Bruno.

According to Rodrigo Gobbo, medical director of the Center for Interventional Medicine at Israelita Albert Einstein Hospital, about 40% of the population will have a thyroid nodule in their lifetime. “Fortunately, the overwhelming majority are benign nodules, between 90% and 95%,” adds the doctor. Taking into account that a good part of people can develop nodules, since 2018 the Israelita Albert Einstein Hospital has been using the radiofrequency ablation technique to provide a less invasive treatment that brings more quality of life to patients.

“The technique is included in a group of so-called thermal ablative therapies, that is to say in which we manage to obtain the death of the treated tissue, in this case the thyroid nodules, by lethal extreme temperatures specifically in the areas processed, and with great precision is needed,” describes Gobbo.

The precision is a differential of the method, which manages, with less time to perform and without general anesthesia, to preserve the healthy part of the thyroid, thus avoiding the demand for lifelong hormonal replacement, in the event of invasive surgery removing or injuring part of the thyroid gland.

“In the case of cancers, our goal is a 100% reduction for up to 18 months,” says Antnio Rahal, interventional radiologist at Israelita Albert Einstein Hospital. He explains that in the South Korean studies, with a larger number of patients because the country has used the technique for longer, the results are encouraging, with patients free of malignancy and with thyroid preservation.

This therapeutic efficacy described by the specialist is such that the treatment is being studied for other problems than nodules, mainly for patients at high surgical risk. Furthermore, Antnio Rahal reports that another relevant scenario is that of patients who have undergone surgery and have had recurrence or even metastases detected in the cervical lymph nodes, where ablation has had “excellent results in well-selected cases.

* Internship under the direction of Deputy Editor-in-Chief Sibele Negromonte

1 – What are the main disorders and problems that can affect the thyroid?

These are hypothyroidism, hyperthyroidism, thyroiditis, nodules and thyroid cancer. Hypothyroidism is characterized by a low production of hormones, the main cause of which is autoimmune (Hashimoto’s hypothyroidism). Hyperthyroidism, on the other hand, occurs due to an excess of thyroid hormones, which can be of autoimmune origin (Graves’ disease) or by autonomous production. Thyroiditis is an inflammation of the gland that can progress to hyperthyroidism, hypothyroidism or even without altering its function. Thyroid nodules are relatively common and the vast majority are benign. Thanks to the ultrasound examination, we can assess the characteristics of the nodules and whether a biopsy is necessary or not. Already the diagnosis of cancer is made by biopsy, and surgical treatment.

2 – Is there an adequate diet for those with thyroid imbalance?

Some foods can improve the quality of life of patients with hypothyroidism, while others can make it worse. Excess salt, for example, which is fortified with iodine by law, can disrupt thyroid function. A good diet includes whole grains, raw foods, nuts, fruits and vegetables. However, it is not possible to control hypothyroidism, for example, with food alone. Hormonal replacement should be implemented in conjunction with appropriate medical monitoring.

3 – Regarding thyroid nodules, when discovered, what are the treatment options for the patient and what precautions should be taken?

The vast majority of nodules are benign. Through ultrasound, we can observe certain features that draw attention to malignancy, including its size. If you have a combination of these characteristics, we request a biopsy. And if the nodule is not suspicious, we only follow up, usually annually, by ultrasound. One characteristic that the patient can follow is to observe if there is any growth of the nodule.