Although the price of Bitcoin (BTC) has encountered several obstacles that prevent it O crypto asset return to 50,000 US$ this situation has an end date: April. At least in the cryptocurrency community estimate shared with the portal coinmarketcap.

So, although the cryptocurrency be on a rocky road these days, The cryptocurrency community estimates that the asset will rise more than 23% from its current price to trade at $48,145 by March 31 and then surpass $50,000 in April.

AT community estimates are based on a kind of survey called “Social Bitcoin Price Estimates”, in which users and visitors of the Coinmarketcap portal can provide a price estimate for BTC on a given date.

To date, more than 83,000 participants believe that BTC will be above $48,000 by March 31, the second is the prediction that the price target of $48,000 will not be reached until Aprilwhich is the opinion of around 53,000 Coinmarketcap survey participants.

The feature is still in beta, but it was released in September last year and, since then, its accuracy index can be considered one of the highest on the market since in 82% of cases the predictions with the highest votes were confirmed correct. 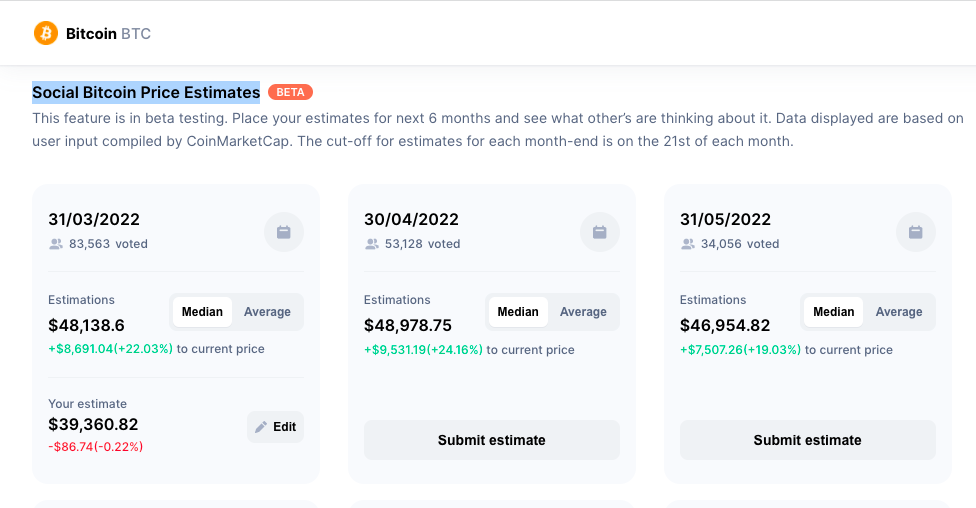 In addition to Coinmarketcap’s social rating metric, the analyst Justinas Baltrusaitisrecalls that the famous “Fear and Greed Index“, an index based on various metrics and sentiments captured on social media, points out that investors are in “extreme fear”, i.e. to the point of extreme fear regarding the price of Bitcoin.

And, as Baltrusaitis points out, Although a first look at the index may indicate a bearish scenario, historically, whenever this metric has been reached, Bitcoin price has started a rally.

“These levels often imply ‘extreme fear’ in the market, an indicator that investors may be very worried about the future of BTC, but historically when this happens the market may see a rally,” he said. he declares.

Also bullish on BTC’s recovery in value is the analyst known as Rek Capital. He points out that BTC is signaling that it is ready to rebound from a multi-month downtrend and form the start of a new bull run.

Therefore, as he points out, Bitcoin is no longer in a downtrend, but in the midst of a rebound from a high macro support level.

“BTC is really bouncing off the low and showing early signs of recovery from there.”

#BTC indeed returns to the upper low and shows early signs of a rebound from there$BTC #crypto #Bitcoins pic.twitter.com/MXmOHNfyMr

As in the past, BTC had several ugly weekly closes below the $40,000 level before bouncing back.

So for the analyst, for everything to go well and for BTC to start a big recovery cycle, the cryptocurrency still has to face the main task of holding the $38,000 mark. If this critical level holds as support, the trader says a rally towards the next major confluence zone around $51,000 is in play. 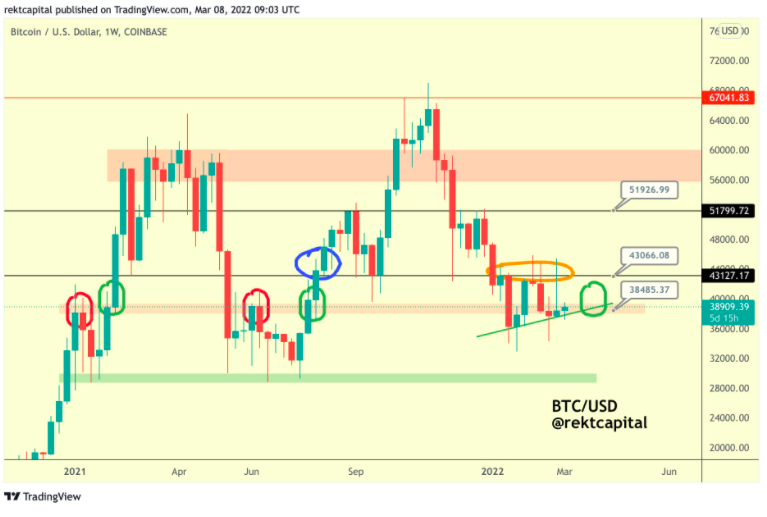 If all goes well, the analyst says Bitcoin could be on track to repeat last week’s rally, where it jumped nearly 20% to $45,000.

“BTC has revisited the lower green bottom and is retesting it as support. A successful retest here and BTC may actually repeat last week’s move. BTC would need to break the dashed green diagonal to allow examination of the level of ~ $43,100.”

#BTC revisited the green Higher Low and retested it as support

BTC would need to break the dotted green diagonal to allow a revisit of the level around $43,100#crypto #Bitcoins pic.twitter.com/xZuedQkzxP