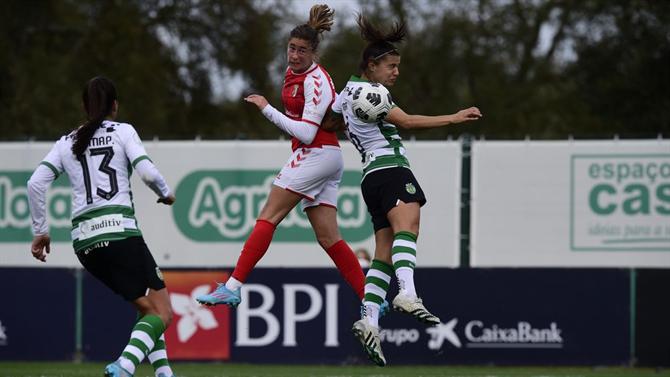 SC Braga are the second League Cup finalists, having beaten Sporting 2-1 in the second leg of the League Cup semi-finals, which took place on Wednesday afternoon, in the Estádio Aurélio Pereira, at the Leonine Academy, in Alcochete.

After a scoreless first half, the emotions were saved for the second half. The first goal came in the 71st minute, following an unfortunate kick from Doris Bacic, as the Sporting goalkeeper could not control a delayed ball from Bruna Lourenço and thus saw the ball go into his own goal. . The Minho side increased the advantage just four minutes later when Valéria Almeida, assisted by Myra Delgadillo, fired into the top left corner from the leonine goal.

Although they had to score three goals to equalize the draw, Sporting continued to believe and even managed to reduce, in the 80th minute, thanks to Diana Silva. The Portuguese international, launched deep by Joana Marchão, escaped the opposing marking and, against Patrícia Morais, did not forgive.

Until the end, Mariana Cabral’s team tried everything to avoid elimination, but inefficiency at the time of submission ended up being fatal.

With this triumph, Guerreiras do Minho – who, it should be remembered, had also beaten the lionesses (3-2) – ensured their presence in the decisive match of the competition, where they will face Benfica, in the final scheduled for the 23rd, at Marcolino de Castro Stadium, in Santa Maria da Feira.