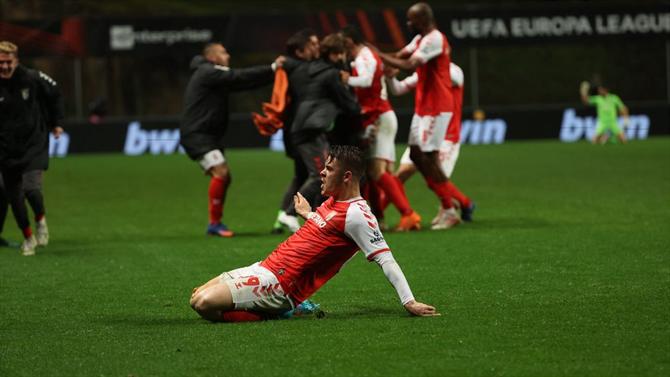 SC Braga entered the knockout stages of the Europa League with the right foot by beating Monaco, at home, by 2-0. In a match open on several occasions, a goal from Abel Ruiz and another from Vitinha allow the Portuguese team to travel to the Principality with an advantage: the return match will be played next Thursday.

Arsenal’s players are off to a great start, putting in a great first half. Abel Ruiz showed a thirst for goals from the start and it didn’t take long for the taste of the foot… just after threatening with a header: Rodrigo Gomes insisted, the ball curled in his legs de Disasi and the Spaniard took the opportunity to isolate himself, no forgiveness in the face of Nubel (3rd).

Abel Ruiz, Iuri Medeiros (twice), Ricardo Horta (ball on the post), Al Musrati and Rodrigo Gomes were looking for a more comfortable advantage before the break, but fate did not favor them. On the other hand, two goals disallowed for offside: one to Gelson Martins and another to Ben Yedder, who had another serious threat canceled out by Matheus.

The break caused Pedreira’s enthusiasm to plummet, with the French balancing the odds and claiming control of the game. Gelson Martins was the most active in the campaign for the draw: isolated, he tried to put the ball between the legs of Matheus, but he stopped his bad intentions anyway; then, head first, he looked for the angle, but the leather slipped over the beam.

The minhotos blamed the wear and tear of a diabolical first half, seeking to unite the lines to defend a favorable outcome. And it is from the commitment of the local players, already with an injection of energy coming from the bench, that a blessed moment was born, capable of driving the stands crazy: the center of Fabiano and the indefensible header of Vitinha (89 ‘), establishing the final result.